Wikipedia arguably is “one of the largest collaborative projects in history”. At the same time, as the diagram below shows, the English version of Wikipedia has suffered a significant loss of contributors between 2007 and 2012 and numbers have been fluctuating since then. Researchers like Halfaker et al. (2013) have attributed this decline to many reasons, such as the increased complexity of community guidelines that govern the editing of Wikipedia. 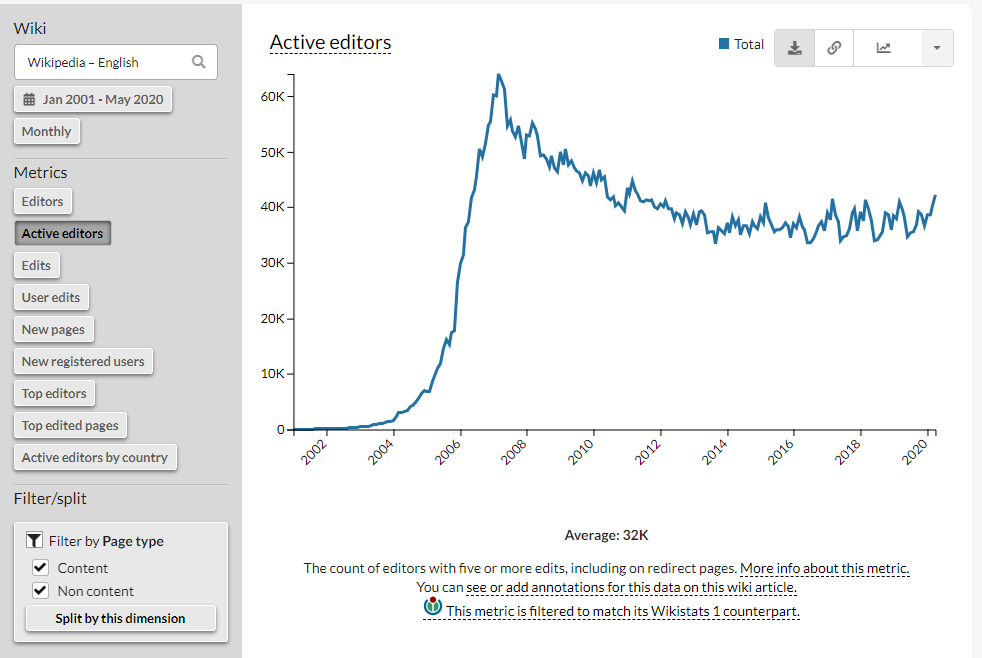 Existing research shows that individualistic editing is one of the main characteristics of Wikipedia’s contribution model (Jemielniak and Raburski 2014). This collaboration model is praised for building the Wikipedia as we know it. However, it is also known for a poor volunteer retention rate.

The reason may well be that not everyone interested in editing Wikipedia will want to follow this model. Some people may want to ‘dip in’ and occasionally edit as they find the time. Others might want to be engaged in a community and contribute through more sustained interactions with other people.

To find out more about this, we might ask whether people on-boarded via Wikipedia editing events are more likely to take the second route, whether people change their behaviour over time and what else we can learn about editing patterns. Do participants collaborate with people who they met at the event? Are there differences in the outputs from people working in communities?

Halfaker, Aaron, R. Stuart Geiger, Jonathan T. Morgan, and John Riedl. 2013. “The Rise and Decline of an Open Collaboration System: How Wikipedia’s Reaction to Popularity Is Causing Its Decline.” The American Behavioral Scientist 57 (5): 664–88.